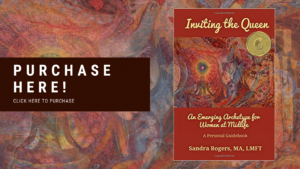 I am delighted to announce that Inviting the Queen has won a Gold Medal in the 2020 Nautilus Book Awards in the category of Aging Consciously.  I couldn’t be more pleased! Thank you Nautilus!

For those of you who may not be familiar with Inviting the Queen, following is a synopsis of what I have written about the Queen Archetype and how this archetype can be invited into the psychic life of today’s midlife woman.

In the past women’s lives have been seen to developmentally fall into three stages—maid, mother and crone. The crone has been seen as the archetype for women from post menopause through life’s end. I have very much wanted to work with midlife women using the Crone as an archetype for this time of life, but met with great resistance to this. What seemed to be missing—something that belongs to this period of a woman’s life and is as yet unnamed. The Crone doesn’t seem to be as active and as extraverted as many women are at this stage of life. The Crone seems to be finished with making her mark in the world, she is capping off her career before retiring, she is not taking up new worldly challenges.  But mature women today do not seem to be finished.

We now live an average of 30 years longer than women did at the turn of the 20th century—that’s more than one-third of a woman’s life. Of course, it is not news that we live longer, are healthier and more educated.  This alone, seems to call for another archetype to constellate—one that is more active, more involved with the world, more in keeping with the energy of a mature and fully realized woman who is not yet ready to move into the more introverted, introspective life of the Crone.  This is the Queen Archetype which a woman whose time of being an active Mother has ended can choose to invite into her life. A woman who has spent her adult life to date raising a family, caring for her husband, and holding a job that brings income and has the flexibility to allow her to fulfill her other responsibilities, finds that part of her life is at an end.  Her children are grown, her husband no longer needs as much support as he once did, or is no longer in her life.  She is no longer living in the realm of the Mother Archetype.

How might we describe the Queen?  She is a woman at her full development, powerful, benign, competent in both the family home and in the outside world. In the outer world, she may still be making important contributions to her areas of skill and competency as her wisdom is developing towards its apex in the later Crone stage. Having achieved success, she can afford to be benevolent and may be a mentor to others, no longer needing to compete.  She is not invested in having “power over” but seeks to become a queen among queens.

To summarize—my main points are that there is a fourth life stage archetype in women’s lives which is emerging more strongly now due to our longer, healthier lives and better education.  This Queen Archetype need no longer be seen as an energy available only to exceptional women, but is available to all women in a number of expressions and is unique to later life development.  Its natural time is after active involvement with the Mother Archetype and before entering the season of the Crone. To be beneficial, the Queen Archetype must be consciously held, available to form a viable axis to the developed Ego, so that the woman may mediate the energy and move closer to wholeness.

The second half of the book uses the seven chakras as a device to see how the Queen Archetype can manifest in various areas of our lives.  Even if you are not a yoga practitioner or a student of Hindu thought you will see how the Queen Archetype can impact your life on these many levels. The second part of the book can function as a workbook, with guided meditations, journaling and other exercises to help you invite and get to know your own Queen energy.

Purchase the book on Amazon HERE.

Since my book, Inviting the Queen: An Emerging Archetype for Women at Midlife, recently published this seems like a good time to write a blog about archetypes and illustrate the three traditional archetypes (before the Queen) attributed to women’s life stages—Maid, Mother, and Crone.  But first, a brief definition ofRead More